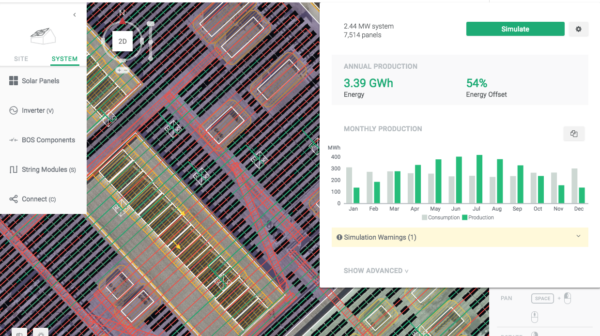 When I joined Aurora Solar in 2016 their core product was an SVG-based CAD engine used to design and simulate solar installations. I used this engine to develop the first version of the popular “fill zones” feature, a tool that pushed the SVG-based CAD engine to its limits and exposed issues with DOM pollution, real-time interactivity, and graphics fidelity.

Together with my background in OpenGL and WebGL, these issues motivated me to meet with the CEO and suggest that we re-write our CAD engine in WebGL. I believed that switching to a WebGL-based CAD engine could improve:

My idea would spur the largest remake of the company’s product in its history, a nearly two year process that resulted in the release of Aurora reDesigned and Aurora’s entrance into the commercial solar market.

Like the SVG-based CAD engine before it, the new CAD engine runs within a single-page application (SPA) written in the Ember framework. Put simply, it is responsible for

Since we wanted to use the new CAD engine for very large commercial solar installations (>20,000 solar panels) on mediocre hardware (older and low-powered laptops) we wanted to keep the engine as lightweight and performant as possible. For this reason, we decided not to use a pre-existing 3d game or physics engine for the web such as Babylon.js or ammo.js and write our own.

Other than using three.js for its vector/matrix math libraries and WebGL functionality, the new CAD engine was written from the ground up. Based on Unity’s entity-component system, the new CAD engine uses 4 types of objects (models, components, entities, and engine subsystems) for reasons including: